Many people with Gonorrhea don't notice it at all. Still, it has serious consequences if you don't treat Gonorrhea on time. Fortunately, gonorrhea is easily treated if caught early. If in doubt, get yourself tested! This prevents inflammation that can lead to infertility in the long term. Read all about Gonorrhea on this page.

Book your STD test below! 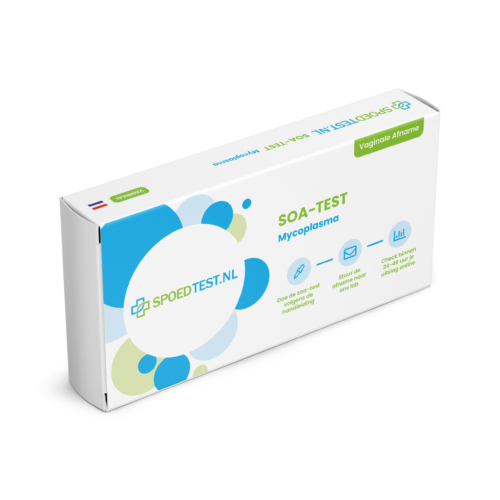 How does an STD test for Gonorrhea work?

Do you think you may have been infected with gonorrhoea? In that case, we understand that you want to know as soon as possible. That way, you know where you stand. Keep in mind that there is an incubation time of two weeks, so make sure to wait two weeks after having sec to test; otherwise, your test may not be reliable. Do you have symptoms that match gonorrhoea? Then you can do the test right away[1]. If you are sexually active and have different sex partners, we highly recommend getting tested for Gonorrhea every year, even if you don’t experience symptoms.

You can take our Gonorrhoea STD test where you want. Anytime, anywhere. The instructions tell you exactly how to do it. After taking the test, you send the test free of charge to the laboratory, where your body material is checked for the presence of gonorrhoea bacteria utilising the PCR technique. You can request your results online after 24 to 36 hours*. Orders placed on working days before 11 PM are delivered the next day.

*For a test with Mycoplasma genitalium, this is after 36 to 48 hours.

Choose the test you need. Order on working days before 11 PM to receive it the next day.

In the manual you can find step-by-step instructions.

Send the test free of charge to our certified laboratory. Our medical team is ready to analyze your test.

You can request the results in the online portal after 24 to 36 hours.

Gonorrhoea is a common STD. One of the symptoms is a pus-like discharge from the penis. Gonorrhoea is therefore also known as the clap. This is also one of the symptoms that can occur when you have a vagina. You can get Gonorrhea by having unprotected sex with someone who carries the Neisseria Gonorrhoeae bacteria (gonococcus). This bacterium then settles on the mucous membranes of the vagina, penis, anus, throat or eyes. This causes an infection called Gonorrhea.[1][2]

This way you can get chlamydia on the mucous membranes of your vagina, penis, anus, throat, and/or eyes.[3]

What are the symptoms of Gonorrhea?

Do you have symptoms, and are you still curious whether you have Gonorrhea? Then look for the following symptoms that could indicate Gonorrhea:

Symptoms vary and depend on the body location in which you are infected. Gonorrhoea of the penis, for example, causes different symptoms than Gonorrhea in the vagina. Below, we describe the various symptoms for each body part.

If you are infected with Gonorrhea of the penis, you will usually notice it within a few days to two weeks. You will often get a pus-like discharge, also called a drip. The discharge is transparent to a yellow-green colour. You may also experience pain when urinating.[1][2] In some cases, Gonorrhea does not cause any symptoms at all, but you can also pass on Gonorrhea without any symptoms.[2]

40% to 70% of cases with people with a vagina produce symptoms. Likely, you won’t notice that you have been infected with Gonorrhea.

The following symptoms are associated with vaginal Gonorrhea:

Symptoms of Gonorrhea: Anus and throat

If you’re having trouble with your eyes and it might have something to do with Gonorrhea, we highly recommend you visit your doctor for a test.

What if I have Gonorrhea during my pregnancy?

How do I prevent Gonorrhea?

You can prevent Gonorrhea by using a condom. This reduces the chance that you will get or transmit Gonorrhea. Use a condom when you:

For oral sex, you can cut the condom open and place it on the vagina or anus before licking someone. You can also use a dental dam.

Keep in mind that a condom or dental dam never fully protects. For example, misuse, or the unexpected tearing of a condom, can still cause you to get an STD. Therefore, it is important to test yourself regularly, even when practising safe sex.[2]

I tested positive; now what?

If you have tested positive for Gonorrhea, it can be a bit of a shock. Fortunately, Gonorrhea is easily treatable. So contact your doctor to start treatment as soon as possible. It’s essential to do this because otherwise, the risk of long-term complications will increase. Want to know what to expect from the treatment? Click on the button below to read all about it.

An ISO-certified laboratory analyses our STD tests. If you follow the instruction manual carefully and wait 14 days to test after your last sexual contact then the result will be equally as reliable as a test from the GP or GGD.

Read more about the reliability here.

Our STI test has several advantages compared to an STD test at the GP or GGD:

*For a test with Mycoplasma genitalium, this is after 36 to 48 hours.

You get the result almost immediately with self-tests, but these are often less reliable. The test may miss an STD or give an incorrect result. In a study by the Maastricht Infection Center, there was one chlamydia self-test from the drugstore that scored 12% on specificity. That means that 88% of people with a positive result do not have chlamydia!

Therefore, the advice is to conduct an STD test in a lab. You take our STI test yourself and then send it to the laboratory. You, therefore, have to be patient until you have the result, but this way, you know for sure that the result is reliable.

With us, you can get yourself tested on:

Do you have a question about STDs, STD tests or sex in general? Are you afraid you might have an STD? We’re here to help you.

WhatsApp or email us. We’re happy to help you!

You can WhatsApp us at:

Or email us at:

Do you have a complaint?

Then go to our complaint form.